So I guess the pretty pictures are gone for a little bit as we get down to the nitty gritty of, what I believe will be?, the most dirty, difficult part of this job (yes, yes, there is still drywall to be done..but that cannot be as bad as pulling down lathe and plaster ceiling!)


Let us start with the befores - I guess if you've never been to our house, you wouldn't appreciate the satisfaction of ripping out our...umm...lovely old kitchen.
Here are some shots from our preparations for the last holiday party to get a sense of the space.

It had the awesome lower paneling (that someone had slopped paint all over), fabulous bunches of wheat wallpaper from the 80's, and a severe shortage of upper cabinets (1 and the 1 large one in the nook). Also, an orange vinyl floor, and the cabinet next to the stove is freestanding. Oh, and there is no ventilation for the stove.

Here is a rundown of the ORDER of our demo process thus far:

1. Remove header that separated the kitchen from the "butler's pantry."

2. Brent demoed the two walls that are getting new windows to see what we were working with as well as the wall where the Ikea open shelving was.

3. Fridge and stove were removed from the space as well as the lower cabinet next to the dishwasher and the one next to the stove, that we are replacing.

4. The lathe and plaster ceiling was removed.

5. Brent downed the rest of the walls.

6. Most of the floor was removed (vinyl and old hardwood underneath).

We found that the most efficient way to do this was by hitting the ceiling with a blunt object to loosen the plaster from the lathe (I preferred to bounce up and down instead of exhausting my shoulders), and then to scrape parallel to the lathe with a flat shovel.  It basically felt like you were shoveling upside down.  We took breaks to haul the plaster out to the dumpster.  Did I mention we LOVE the dumpster? We do. 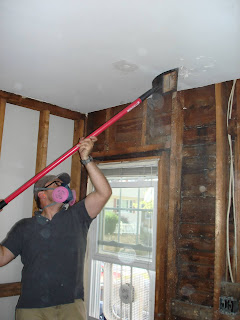 To remove the lathe, Brent broke into it by punching an axe through and then using the weight of the axe to pull down the strips.  I then came back with a hammer and crowbar to remove the stragglers. 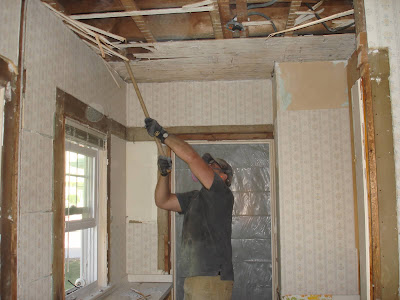 All in all, we were able to get the ceiling down in about 3 hours on Saturday night.
With one minor injury...

The Rest of the Walls Came Down

Brent was able to tackle the rest of the walls on Sunday, while I did curriculum work. (Booo!) 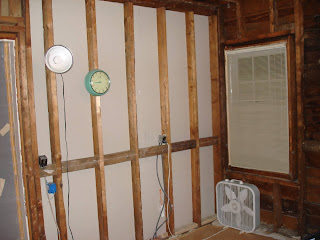 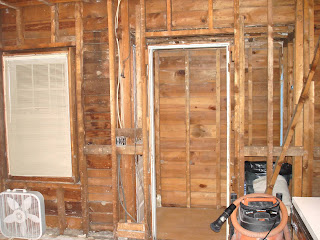 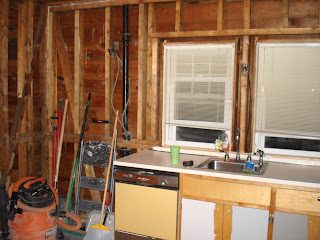 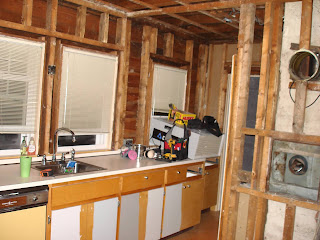 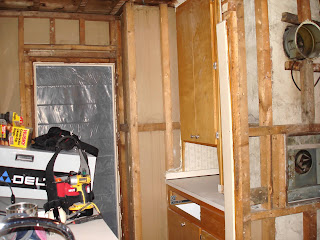 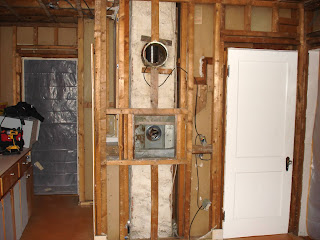 We did some online research as to how best to tackle the job of removing our old kitchen floor.  It was vinyl on top of old hardwood.  We considered refinishing, but since it is a kitchen with lots of traffic, it seemed best to install new pre-finished hardwood because it has a more durable finish than refinishing the old stuff.  We knew it would be an arduous job, but found some helpful hints online.  The best tools for the job were: the circular saw set to the thickness of the hardwood, a 36" crowbar, and Brent's steel-toed work boots (to kick the crowbar!). 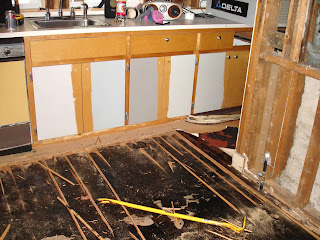 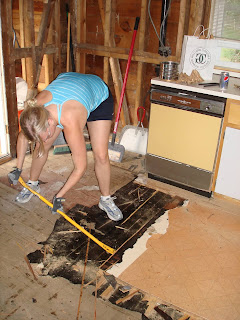 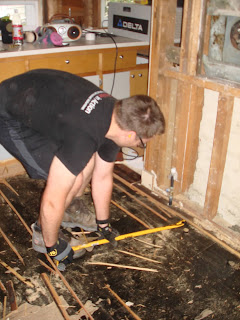 Now we just need to figure out how to get the flooring under the toekick out.  We would LOVE to have a toekick saw, but are contemplating alternative measures. 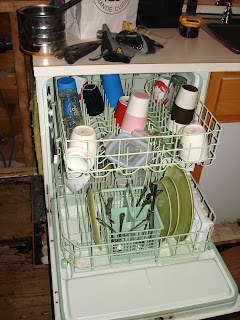 Next step is out with the dishwasher, it ran it's last load last night :(.  Then the sink and countertops, being very careful not to mar the face frame of the lowers that we are keeping and spraying.

We are very excited that our electrician can start his rough in on Thursday!
Posted by Liz B